Don’t miss a new release, sign up for my newsletter. 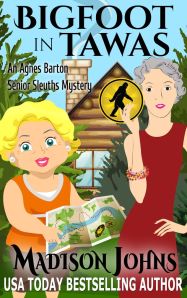 The sixth book in the Agnes Barton series.

Agnes and Eleanor embark on their most challenging case to date … finding Bigfoot!

Agnes isn’t sure what to say when Billy Matlin hires her to find Bigfoot, and it doesn’t help that Eleanor is hiding in the car. Who is she to say that Bigfoot isn’t real? And, lord knows, she sure could use a paying gig. Armed with a baggie full of brown hair, Agnes and Eleanor march into the sheriff’s department, but Sheriff Peterson is reluctant to test the hair, outright refusing to use county resources for a DNA analysis.

Before long, the Department of Natural Resources and the United States Fish and Game Service also both refuse to test the hair, suggesting that the only way they would investigate is if an endangered species is involved. Never one to be told no, Agnes does the only thing she thinks will get them to change their minds by planting evidence in the form of a road-killed Bald Eagle on Billy’s property.

East Tawas is not only overrun with Bigfoot sightings, but it would seem just about everyone they question claims to have seen something mysterious in the woods. When big game hunters roll into town, and with the DNR and U.S. Fish and Game fighting over the brown hair, not to mention a reality show offering up a ten million dollar prize to whoever finds Bigfoot, it’s up to Agnes and Eleanor to find out the truth, which is further complicated when Billy Matlin mysteriously disappears.